Another early start with a 7am pick up. About 10 days earlier I had found a pair of Rollers and was hoping that they had settled down so I could show Dennis and John. We had great views and took loads of photos of these rainbow coloured birds. At the north gate entrance we quickly saw Moustached Warbler. Dennis wandered off looking for the calling Nightingale as two Great Spotted Cuckoos arrived on the wires, followed by a Montagu’s Harrier. Red rumped Swallows and Pallid Swifts were peppering the sky above us. John said it was a great start to the day but Dennis was a little glum as he needed Montagu’s Harrier. Next stop was at San Felipe which has turned into a great place to visit, what a difference, just a casual walk around turns up a lot of good birds and it’s great for Photography. Birds seen included 6 different herons in 20 minutes, Collared Pratincoles, Whiskered Terns, Little Tern, Marbled Duck, and Red Crested Pochard, lots of different waders including Temminck’s Stint and summer plumage Curlew Sandpiper but no sign of Laughing Gull despite three or four previous attempts. A Booted Eagle came over head and it would have made Dennis’ day, but he’d nipped off for a toilet break and missed it. We called it a day and headed home about 2.30 as it was getting a bit hot. As I am trying to write this article I am distracted by the Red necked Nightjars calling a few hundred yards away from my house. I guess I should look for the Rufus Bush Robin soon, I’ll let you know how I get on.

An 8.30 start and Dennis had a sore head after having gone to bed after 3am! About an hour later we arrived at Alcoy and had just got out of the car when we were greeted with the call of a Golden Oriel. John had a brief view as it flew across the field and a pair of Crested Tits were seen in the bush closest to us. We hung around for a few more minutes before we decided to move up to see the Griffon Vultures. As we drove into the little car park there was a Woodlark singing on the wire above our heads. We were not looking forward to the hike uphill but we started off, not getting very far as a Dartford Warbler sat up on a bush close by. A few photos later and we set off again. We didn’t get up the track more than a few metres as a pair of Woodlarks blocked our way and refused to let us go by until we had taken more photos! In fact Woodlarks were very common there and were very approachable. Eventually we got to the Vulture feeding station and had great views of these huge birds. A pair of Ravens were doing a fly past and, on the cliffs below, we saw Coal Tits, Serin and Crested Tits along with one late Black Redstart. It was now time to get up into the Font Roja but this was a bit disappointing. Bird seen included a breeding Firecrest, Robin, Blackcap, Chaffinch and Blue Tit, but not much else. It didn’t help that it was very noisy here with lots of people out and about so we called it a day and set off for home. We all had such an amazing time over the three days, seeing so many birds and visiting lots of different habitats, with great company and banter, we all promised that we will do something again in the future 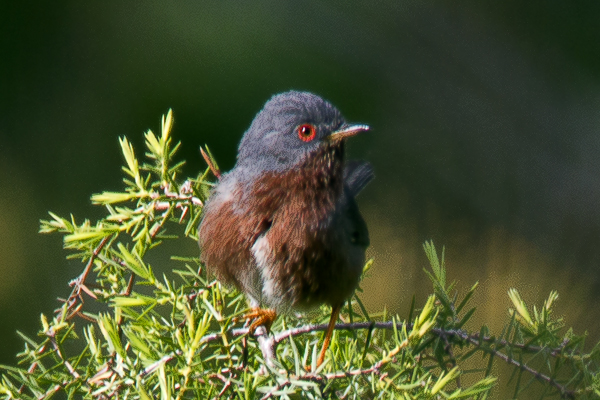