22nd December – We have now relocated to a rented cottage on the edge of Blithfield Reservoir in Staffordshire. It is nice and peaceful here, and after battling through the crowds in Morrison’s Supermarket yesterday, I think we are now ready for Christmas. Today it is raining and more rain is forecast for tomorrow so our birding is confined to watching any birds that might swim by, or fly into the trees down by the lakeside. So far we have seenCoot, Mute Swan, Tufted Duck, Great Crested Grebe and a small party of Long tailed Tits in the trees. In addition, a group of noisy Jackdaws can usually be seen hopping about on the roof of the farm buildings here. The mist is now gathering so I don’t expect to see much more today. We will see what turns up tomorrow.

December 24th – Well I wasn’t here most of yesterday, and when I was here I felt quite ill! Today there was a brief glimpse of the sun between the showers and I managed to spot a Grey Heron down by the lake along with aCrow chasing two Magpies or it may have been the other way round, oh and there was a Blackbird too.

December 26th – We managed a a short trip over to the woods and the other side of the lake today and found plenty of small birds on the feeders and lots of ducks on the reservoir. The highlight though was seeing aTreecreeper as we entered the woods and watching it climbing up a tall tree for a few minutes.

December 27th – After a short shopping trip into Rugeley, we drove to the little Wildlife Trust nature reserve at Wolseley Bridges. The initial brightness of the day had be now disappeared to be replaced with yet more rain, Nevertheless, we donned our wellies and plodged round the soggy paths to have a look around as we had not been here before. There were a few Mallards, Mute Swans and Canada Geese and the usual suspects were taking advantage of the feeders. We went to have look at the River Trent, which was very high and I spotted a lovely male Goosander and then a second one, both near to the river bank and moving down river, not that they had much choice in that as the river was running very fast! A great bird to see, especially as we had gone out with no expectations, just a need to get out to the house for some fresh air. I was pretty pleased to have added two new birdsTreecreeper and Goosander to my year list in just the last two days! I’m still hoping for a Waxwing on December 31st! 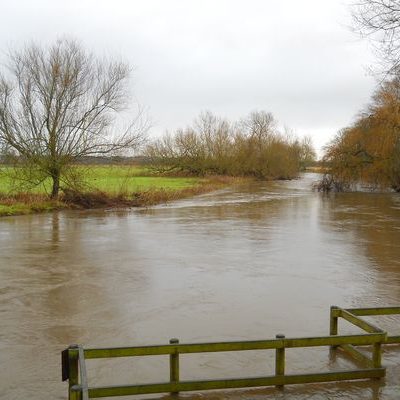 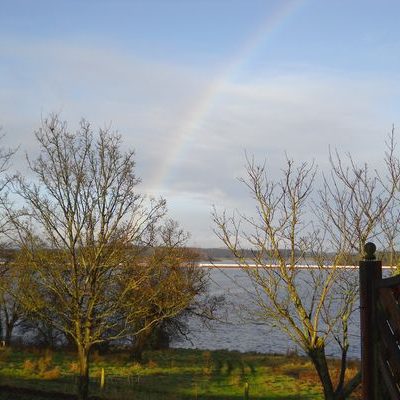 A rainbow over Blithfield Reservoir taken from the bedroom window of our cottage, and the River Trent where two Goosanders were seen under the overhanging trees on the right