Today we joined other CBBC members for the December field trip. It was a lovely sunny, relatively warm day and everyone was in a cheerful, positive mood as we set off for our first stop at El Clot. John and I initially joined a group going to the main hide, and on the way someone had somehow spotted a Little Owl peeping out of a small tree, where a Blackcap could also be seen hopping around. At the pool the usual Shoveler, Mallard, Teal, Coot, Moorhen and Little Grebe were joined by a close Grey Wagtail, 2 Snipe and I had a brief sighting of a White headed Duck. Cetti’s Warbler and Water Rail were also heard but not seen. After a while I set off to find the second group who were half way up the hill looking at a group of Stone Curlew. Eventually, we returned to the cars and set off towards the tower lay-by at the Salinas. 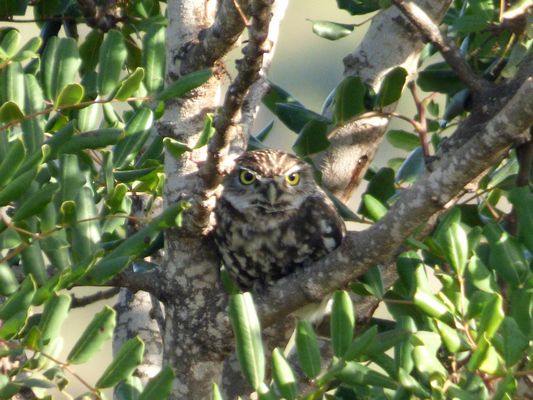 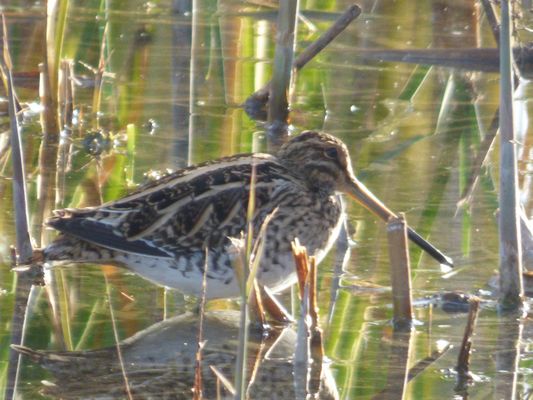 The Salinas produced it’s usual set of good birds including, Greater Flamingo, Slender billed Gull, Sandwich Tern, Turnstone, Little Egret, Great White Egret and a couple of Spoonbill flew over close by. Across the road we could see Little Stint, Black winged Stilt, Redshank and Greenshank and in the distance a Marsh Harrier and a Booted Eagle were flying over the reeds. A distant group of Glossy Ibis were also seen flying around at the far side of the lagoons.

Our next location was the Palm Farm Track (PFT) where I spotted a Buzzard on the roof of a building, although John and Bryan were telling me it was a chimney. When Trevor stopped the car they had to agree it was indeed a Buzzard! When we stopped near the bridge we saw a Kestrel sitting on the wall, another one was flying around and a small group of Jackdaws landed by the nest box on a pylon. We continued along the track and turned right into ‘green sandpiper alley’ where we all parked up and had a scan around. Within minutes Bryan called out a Black Shouldered Kite, which was definitely my target bird for the day. While in England last week several people had posted photos of this bird on my Facebook group, and Bryan had also emailed me a photo, so I was feeling pretty peeved at not being able to see the bird. I was jumping up and down with joy (whoever Joy is) and getting brilliant views of this amazing bird through various scopes. Happy Days! Not long after this Bryan called in a Great Spotted Eagle which was flying with other raptors in the distance above El Hondo. Several other birders then looked through their scopes, and the identification was confirmed; another great bird to add to the list! The other raptors flying included 2 Booted Eagles and a Marsh Harrier. The Black Shouldered Kite seemed happy to stay on it’s perch at the top of a dead tree until a car came along the track and flushed it. 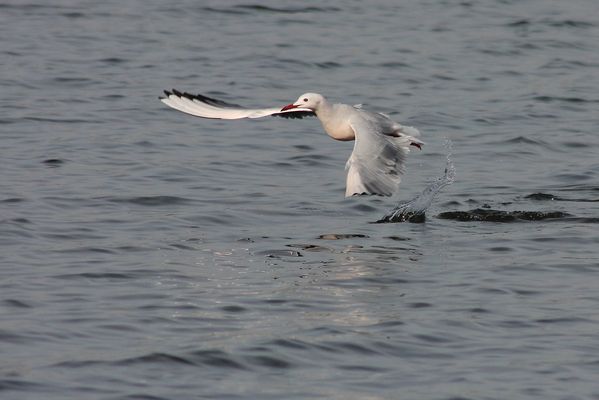 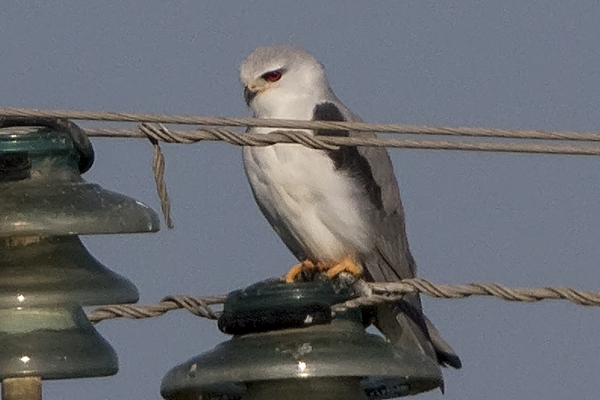 We continued on our route back along the Vistabella road heading towards El Pinet. Here we found a few Black winged Stilts, Flamingos, Dunlins and Little Stints. After a short while we headed to the Gallego Playa Restaurant for an enjoyable lunch, during which a few members, who were sitting near the window, spotted Sanderlings feeding along the shoreline. Once we had finished lunch, and the business of the club’s AGM had been concluded, some members went off to Santa Pola harbour to watch the fishing boats coming in, while Trevor, Bryan, John and I travelled back along the beach road to try to get Trevor the 100th bird for his trip list. This was soon achieved in the form of a couple of Audouin’s Gulls and we all headed home happy.