After the day’s birding at Yecla, David Roe, David Lewis and I decided to move on to Corral Rubio to try and see great bustards.

At the lake just past La Higuera we were rewarded with 50+ Greater Flamingos in flight overhead, plus Coot, Pochard, and a single White headed Duck.

Driving on, Red legged Partridge ran across the road, and there were many pools of standing water from the heavy winter rains, where we saw Lapwing, Black headed Gull, Black necked Grebe, Red crested Pochard, Black winged Stilt and Shelduck.

Heading down the usual farm track at the back of Corral Rubio, there were many more Flamingos and waders at the first pool on the left, and at the next big pool there were three Marsh Harriers flying or perched in the bushes.

But the highlight of the day was excellent views of no less than 31 Great Bustards, including many males in what the Collin’s Guide calls “early stages of display” plus several more in the spectacular full or “foam bath display”. Late on a beautifully sunny spring evening we reluctantly had to leave this spectacle and head homewards. 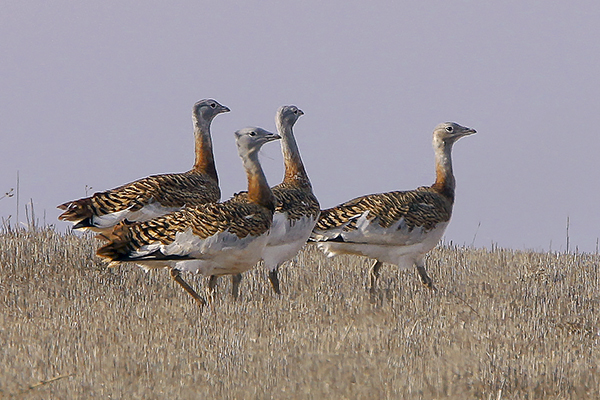