25 members and guests met at the Visitors Centre car park to a completely different landscape, all the excavation work around the Centre is now complete and the new scrapes were full of water leaving the Centre almost on an island. Being so recently completed few birds were present although a Kentish Plover, a few Little Ringed Plovers and a Green Sandpiper were trying it out.  Before we left the car park we were treated to good views of large numbers of Pallid Swifts, House Martins and Alpine Swifts overhead and as we made our way along the board walk a Booted Eagle drifted past. On reaching the first hide we saw up to 10 Marbled Duck a great sighting due to their rarity. A Red Knobbed Coot, with white collar, and a Purple Swamphen were also seen. On leaving the hide Cetti’s Warbler and Bluethroat were heard. At the second hide large numbers of gulls were making their presents known, including a good number of Mediterranean Gulls in summer plumage, also seen from this hide were Ruff, Water Rail, Redshank, Spotted Redshank plus many more common species. We retraced our route towards the car park, when we saw a male Subalpine Warbler which eventually gave us some good views. We left the car park to head for Finca Bonelli’s Eagle having identified 45 species, a great start to the day.

We arrived at Jane and Colin’s and had some wonderful homemade cakes and biscuits along with tea and coffee.  Soon we had a brief view of a Bonelli’s Eagle and later we had some very good views of this uncommon Eagle, we also saw a pair of Ravens displaying, several Jackdaws, a Thekla Lark and an Iberian Green Woodpecker. We left Jane’s and headed for our lunch stop, on the way we managed to see a Little Owl. Our lunch was at Restaurante Rocio where we were not only treated to a very good meal but several additional portions of food, One of the best if not the best meal we have had with the Club.  We made our way towards the Vistabella road, stopping at the rubbish tip near North Gate, after a short period 3 White Storks arrived and sat on the pylons, we checked the trees across the road opposite and soon spotted a Greater Spotted Eagle which promptly flew around giving us great views and showing us what a huge bird it is before re landing in the same trees. We moved on to our final destination and as we left our cars we saw 2 Red rumped Swallows and Pallid Swifts. We walked to the hide and added White Headed Duck, Red Crested Pochard, Black Necked Grebe, Osprey and good numbers of Sand Martins to the list. Our trip came to an end, it was rather cloudy and becoming chilly but we had had a great day and had identified 65 species. 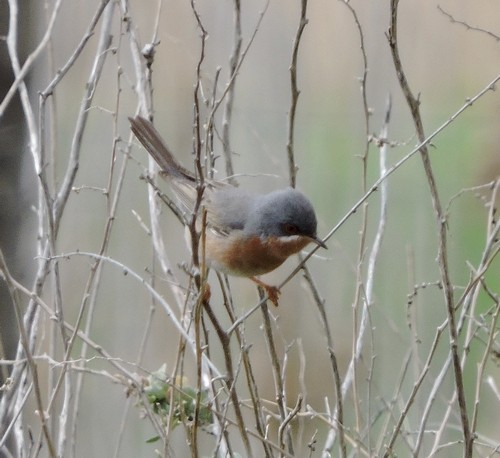 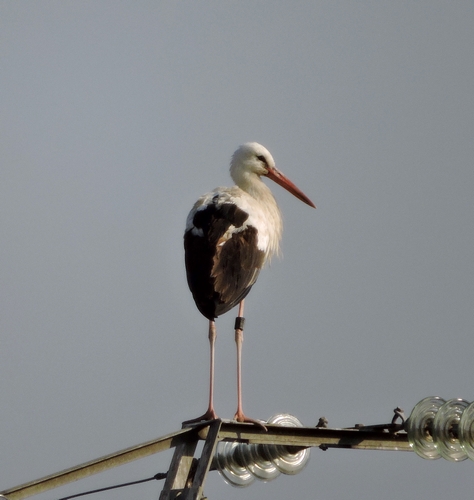