It was a bright sunny day when we met our friend Trevor and set off on our annual visit to Petrola. To our surprise, just before we arrived at our turn off, a single Great Bustard flew overhead and across the motorway! At the Bonete turn off we turned left towards La Higuerela and drove to the railway bridge where we parked and scanned the area for birds. I spotted another single Great Bustard in the distance and we all had a look through the scopes, just in case this was the only one we would see. Large numbers of larks could be heard and we managed to get a look at a couple of Calandra Larks sitting in a grassy field. We continued along this road passing a wooded area which held Goldfinches and Chaffinches. Suddenly a Jay appeared flying through the trees and this was soon joined by two more of these showy birds. As soon as we entered the village we took a sharp left turn onto a farm track which takes you across the plains. We spotted plenty of larks here and debated whether they might be Thekla Larks or the more usual Crested Larks. Further along the track we came across a Northern Wheatear, our first for the year, and the first of many we saw during this outing. As we were driving, John spotted a bird which flew fast over the road in front of us and into a small tree on the roadside to our right. We all stayed in the car and waited for it to re-appear. After a short while we heard the bird giving a strange call and decided to all approach the tree together in the hope of seeing the bird. As we came close to the tree the bird took flight, not giving us much chance for a good look at it. Only John saw the bird well and he was convinced it was a Great Spotted Cuckoo. (We have now listened to GS Cuckoo calls on the Internet and are happy with our identification.) After continuing along this road for a while Trevor spotted a group of about five or six Black bellied Sandgrouse, which although quite distant, gave us very good views through the scopes. After a while they took flight and we could clearly see the black bellies which give the birds their name. As we approached the large lagoon at the end of this track we there were raptors in the air and when we parked up near the lagoon we could see there were at least two Marsh Harriers, a male and a female. We had a great view from where we were and I twice spotted the male carrying a stick, presumably nest building or maintenace. We saw both birds perched on the ground and flying over the reeds, and for John and I these were the best views we have had of a male harrier as we are more used to seeing the females. We scanned the lagoon finding Coot, Shoveler, Little Grebe, Pochard, Mallard, a Grey Heron, Lapwings, Rock Dove and an unidentified wader, which might have been a sandpiper. We continued along the side of the railway until Trevor shouted ‘stop’ as he had seen a Marsh Harrier perched at the edge of the reeds. John reversed the and we all saw the bird fly off at close range. Just before we came to the end of the track where it meets a proper road again, we came across a large flood all across the road. Trevor and I got out of the car to reduce the weight inside, although for me it was more about not being in the car if it ended up stuck in the middle of the flood! I took my bag, my bins and the camera with me of course! Trevor attempted to test the depth of the water with a stick, but it was difficult as he couldn’t reach the middle where the water was deepest. When he evetually threw the stick into the water John thought he had seen the stick bounce and decided he would take a chance. Luckily, the car got through and Trevor and I scrambled along the side of the road and got back in the car. Next we travelled to the lagoons at Petrola and took the first turning which took us along the right hand side of the lakes. We drove along this road as it is usually easy to get close views of waders in the water on both sides as they are not normally disturbed by the car. Unfortunately, we couldn’t go very far as the road was completely flooded up ahead. It seems there has been a lot of rain, or maybe even snow, here recently. Luckily, there were a few birds at this end of the pool, including Redshanks, a Water Pipit and at least 3 Yellow Wagtails of the blue headed Iberian variety. These birds were an amazingly bright shade of yellow with the contracting blue and white head pattern showing up well. On the other side of the road a Little Ringed Plover could be seen through the gaps in the fence. We stopped at the end of the path that leads to the hide to eat our lunch, continuing to scan the lagoon and the reeds and finding more Shovelers, Black headed Grebe and 3 Reed Buntings at the botton of the reads. After lunch we drove down the other side of the lagoon, where there is a high but distant view over the water. From here we could see a large group of Greater Flamingoes on an island and in the water. There were also plenty of Black headed Gulls on the water and 2 White headed Ducks were diving close to the shore. We left here and set off for across the tracks where Great Bustards are norm ally seen. After driving and scanning the wide open fields trying to distinguish birds from rocks and bushes for some time, John spotted a single Great Bustardon top of a ridge silloueted against the sky. As we continued a Kestrel was perched in a nearby tree and a lake on our right held more ducks, Coots and Greater Flamingoes. Finally the track joined the proper road again and we continued through Corral Rubio, turning right between two lakes. As we scanned the water to see what was present I was surprised and delighted to see a White Stork on the edge of the lagoon showing well, brilliant! As we moved further along the road there was more water on the fields and one of these temporary lakes held a group of Red Crested Pochard another new bird for this year’s list. In fact I added 10 species to my year list during this trip. Further along this road towards Bonete, Trevor spotted a group of about 25 Great Bustards in a field on our right, this was more like it, a lot better than just the single birds we had seen so far. They were not too far away so we watched them for a while before they took off, giving us an excellent flying display. Our final stop was near some farm buildings which have previously held Rock Sparrow but we didn’t see any this time. A Corn Buntingwas singing from a wire, however claiming the title for last bird of the day. We had a short coffee stop at a garage cafe before joining the motorway and heading back down to the coast. It had been a long day as Petrola is about 95 miles from home, and that is before you start driving around the tracks. Despite this we all agreed that it had been an excellent day’s birding with plenty of quality birds giving great views, and a few nice surprises along the way. 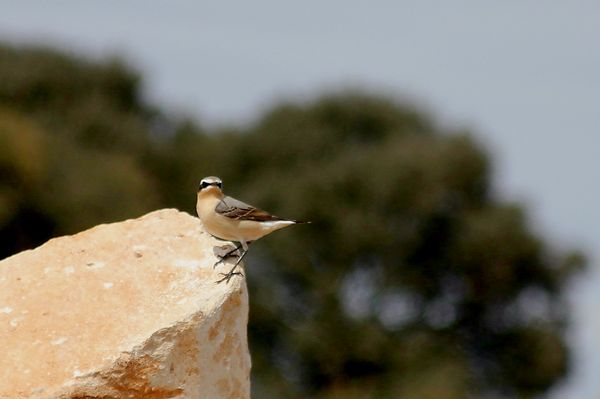 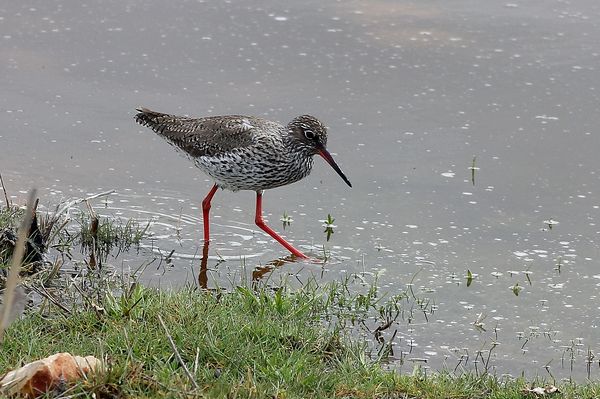 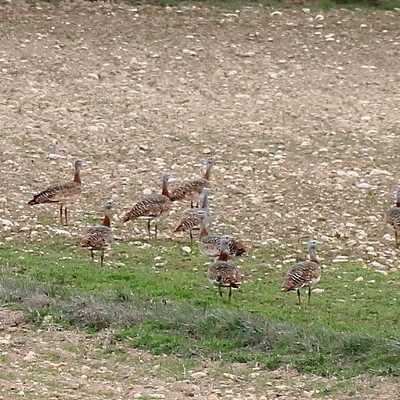