We arose after a comfortable night at the Hotel Castillo d’Archer, in Siresa, deep in the Hecho valley, looking forward to an adventurous day. We were not to be disappointed. Acting, as they say, upon information received, we headed for the tiny village of Borau, first having to negotiate a somewhat treacherous, mountainous road. Along the way, we paused as we found a Treecreeper beside a municipal tennis court. Its thin call confirmed that it was, in fact a Northern, familiaris bird – a Spanish ‘tick’ for my passengers.

Once in Borau, we sought out the somewhat rudimentary ‘Town Hall’ and were lucky in that Wednesday was one of two days upon which it was manned. So, the poorer by five euros, but thanks to a charming lady secretary, we left armed with a permit to drive up the Pista de Blancas, a track leading up to – and past – a montane refuge at 2,200 metres altitude. The road/track seemed to go on forever, climbing, climbing: in woodlands as we climbed, Song Thrush, Mistle Thrush, Great Spotted Woodpecker and Coal and Crested Tit were seen, but it was out above the tree-line that the birds became more interesting, with Northern Wheatears predominating, and the odd Red Kite wheeling away as we approached. A Water Pipit, then a Skylark added to the list, but the track became difficult, as sharp rocks, washed down by the winter storms, littered the surface. Alpine Chough flocks wheeled by, their odd, buzzing calls distinguishing them from their Red-billed cousins. Snowdrifts became a factor, limiting the width of the road available, but wandering around on the first of these were at least three handsome Alpine Accentors – one of our ‘target species.’ As we pondered the wisdom of continuing, our decision was made for us as a front tyre deflated – the sharp rocks had won. Somehow, with Paul doing the lion’s share of the work, we got the wheel changed, and rather gingerly eased down into Jaca, where we paid over the odds for a salad as we waited for a tyre-repair workshop to open. The repair, however, was very reasonably and efficiently done, and we were able to carry on birding. Near Aisa, we saw a soaring Bonelli’s Eagle – the only one of the trip, but our day left us in need of a meal and good night’s rest – both amply provided by our hotel. 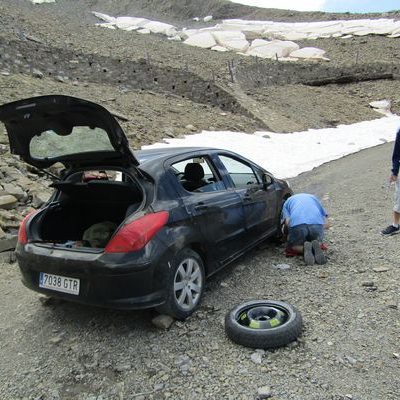 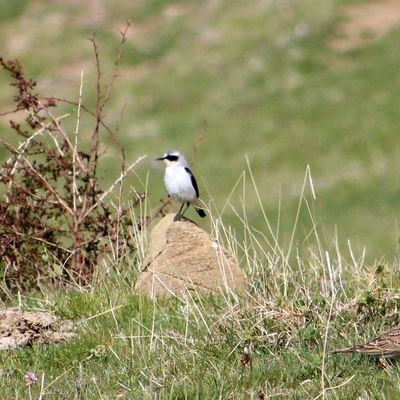 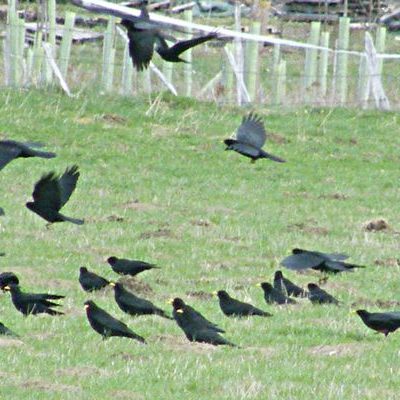