With birding neighbour Peter Messent and his good friend Bow from Sweden, we set of to Yecla arriving around 9.30. The first bird seen was a Great spotted Cuckoo which flew in front of us and landed by the side of the road. Next we had a very obliging Calandra Lark, quickly followed by Whinchat, Stone Curlew, Thekla Lark and Short toed Lark. We came across a colony of Bee-eaters busy pairing up and making their burrows, giving us wonderful views of these rainbow coloured birds. Woodchat Shrike, Rock Sparrow and Corn Buntings also showed well along the route. 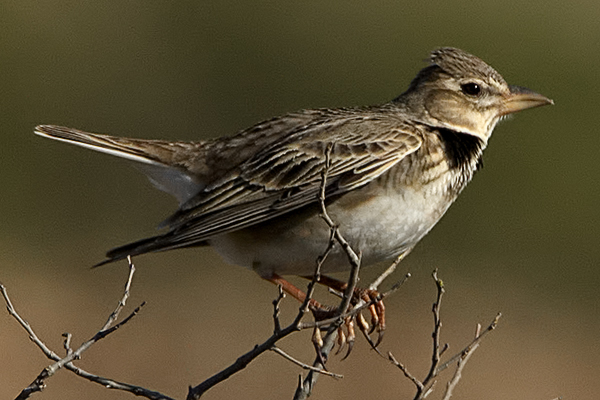 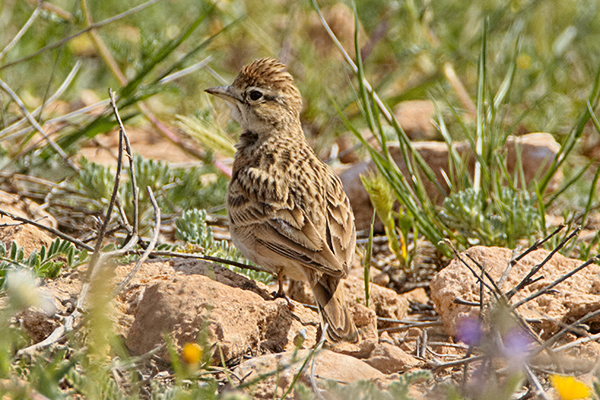 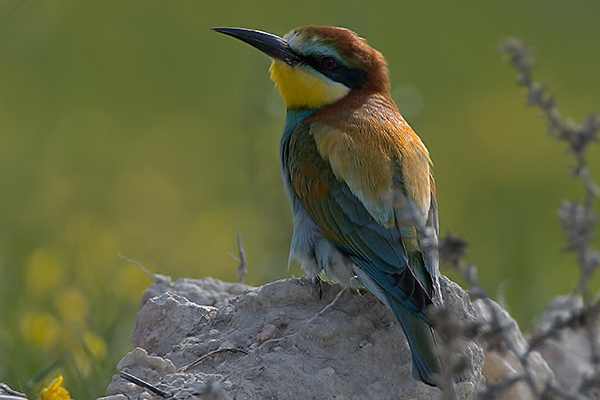 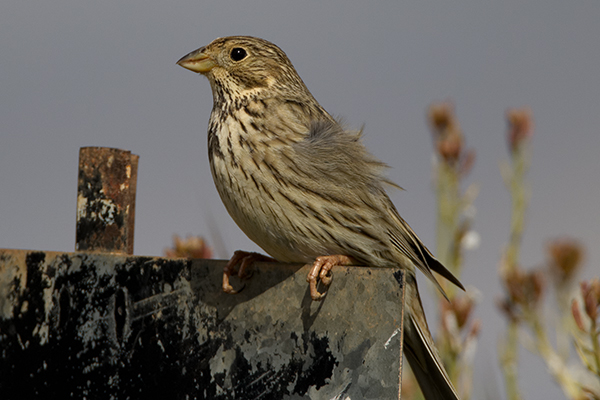 We moved on to the Farm House which last winter was re-roofed, hoping that the Lesser Kestrels would still have some nesting places left. We were pleasantly surprised to find that, not only had the Builder/Farmer left some raised roof tiles to allow for nesting, but he had also added about eight nest boxes placed high up on the farmhouse wall. Good numbers of boxes were occupied and other birds were nesting under the roof tiles. As per normal we were getting behind in time with plenty more ground yet to cover. We moved on passing the farm house to one stubbly field which held over 60 Pin tailed Sandgrouse, a few at very close range. The Sandgrouse slowly walked further away giving fantastic prolonged views. Good numbers of Black bellied Sandgrouse were also seen. Moving on, Black eared Wheatear, Chough and Black Wheatear were also seen. We left Yecla at about one o’clock heading to Bonete. 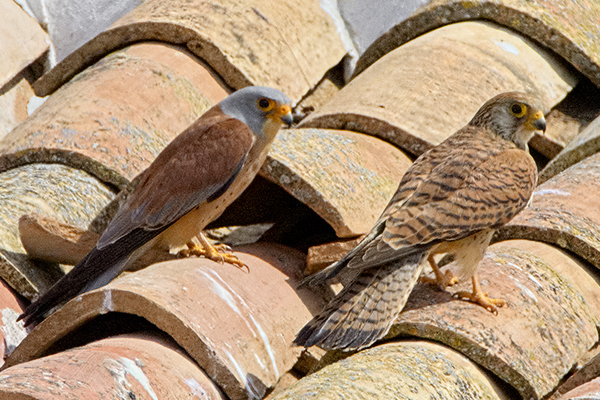 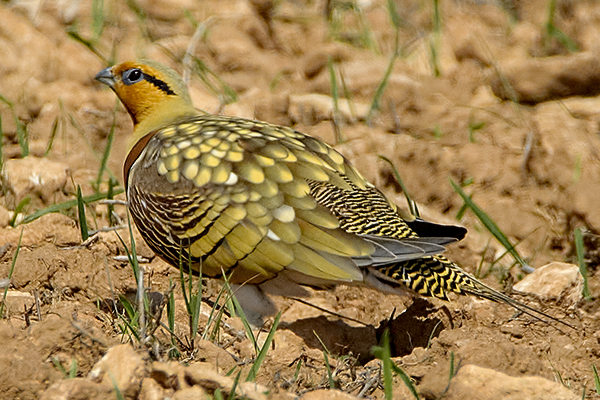 The area was looking fantastic in the afternoon light, deep red soil contrasting with golden wheat fields swaying in the wind. With time running out and having to return the car by 7 o’clock we decided to take a few short cuts. We were glad we did as we found a Little Bustard feeding right next to the road. (What luck?) A Mistle Thrush was in the woods around Higueruella as were a few Bonelli’s Warblers, a skulking Subalpine Warbler and an Iberian Green Woodpecker. After a quick lunch and a cup of tea we were cutting across the plains and on to the Petrola lakes where we found Gull billed Tern, Marsh Harrier, Black necked Grebe, Common Sandpiper, Iberian Yellow Wagtail, Little Stint, Gadwall, and Red Crested Pochard. 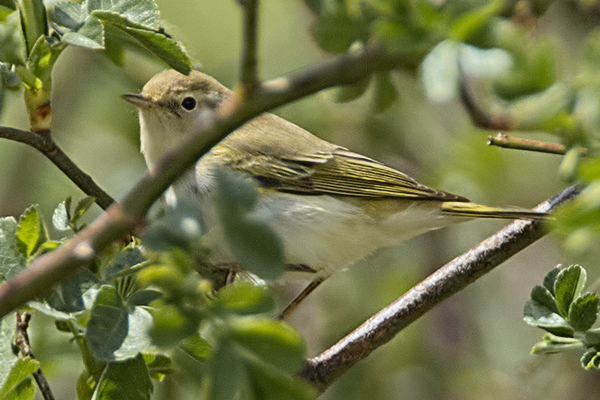 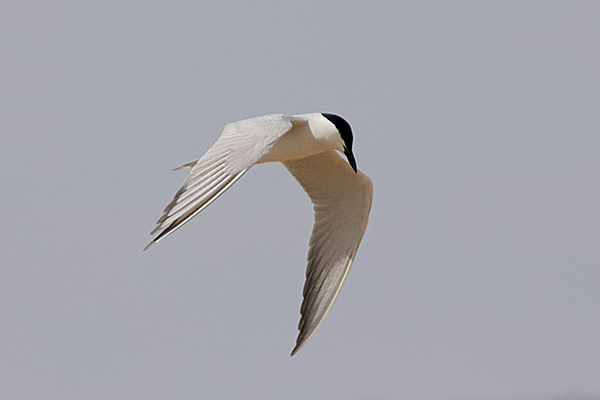 We made a dash to Corral Rubio fingers crossed that the Great Bustards would be there, and true to form they showed well. Bow and Peter were really happy with what they’d seen on our day’s adventure, Heading back to the motorway we saw 2/3 more groups of Great Bustard, arriving back at Gran Alacant at 6.50 and just in time. 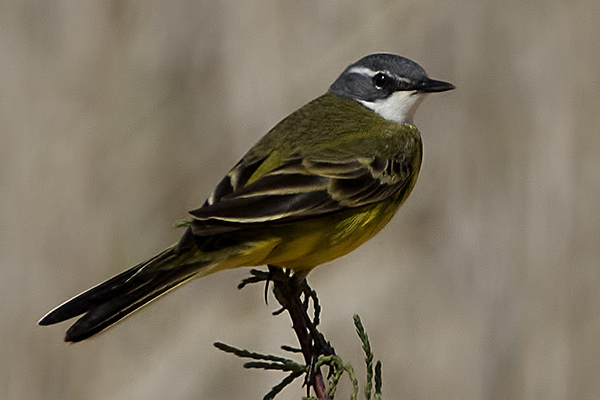 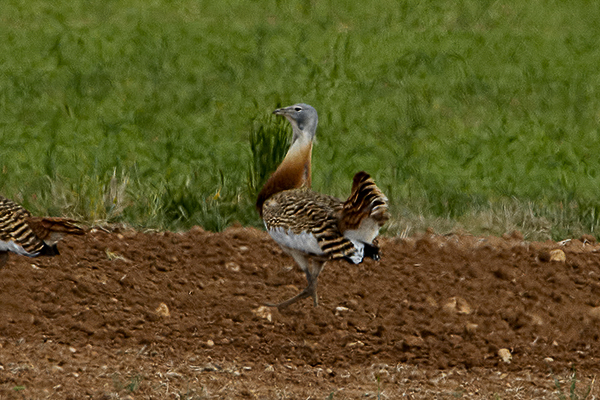 A long day but well worth the effort, we had some great view of birds, a few photos, and to celebrate our day’s birding a well deserved glass of wine or two.