An early start got us to the turning off the main road (by the yellow house) by about 8 o’clock.  Calls of Corn Buntings greeted us along with a few Magpies.  A short way along this small road we saw the first Black-bellied Sandgrouse, a group of 6 flying around and then landing nearby.  However getting close enough for photography was not so easy. A fine female Montagu’s Harrier drifted by, pausing only to give grief to a surprised rabbit before moving on.  Once cultivated fields gave way to stony ground we soon picked up Black Wheatear and Black-eared Wheatear.  Further along a call of nature stop resulted in us seeing a couple of Woodchat Shrikes, using the vantage points of the irrigation posts in the fields. 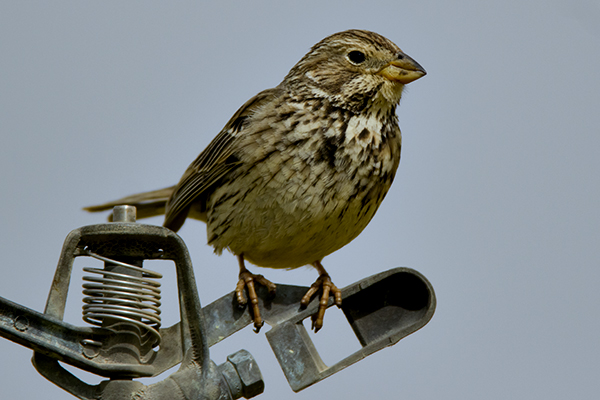 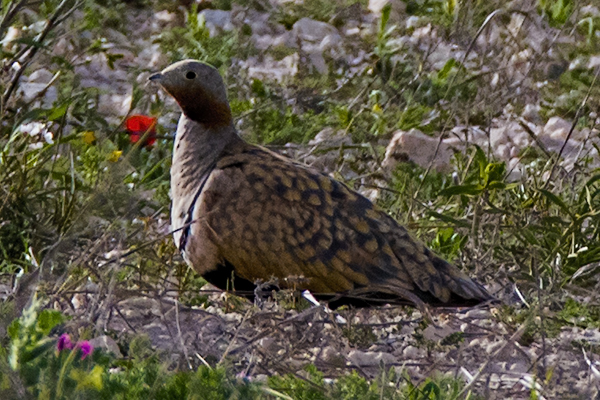 A short distance further on we took a small track to the left.  After about 400 yards it petered out but having got out of the car it became apparent that we were being watched by a cat, sunning itself on a rock.  A wild cat maybe.. It was quite large with a large, bushy, banded tail.  When approached it took off at great speed and then disappeared.  Crested and Calandra Larks were around in good numbers.  Further along the road we again stopped to observe the larks, but this time it was the Short-toedLarks which showed particularly well.  A further diversion to the farm buildings provided excellent views of Lesser Kestrel.  At least 8 birds were seen, at times hunting over the fields and then returning to the roof of the barn. Great views here.  A little later we saw a pair of Chough and yet another Black-eared Wheatear.  By now time was pressing so we soon rejoined the motorway and headed towards Bonete. 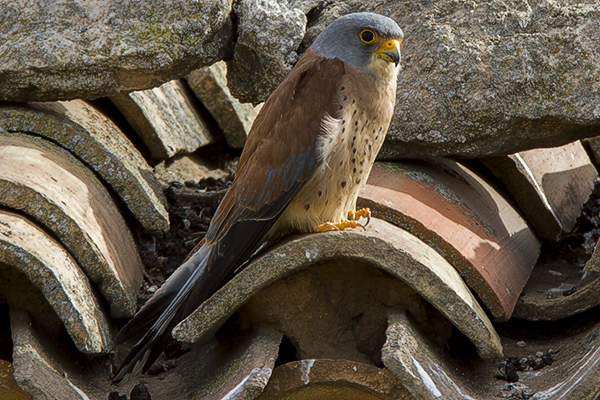 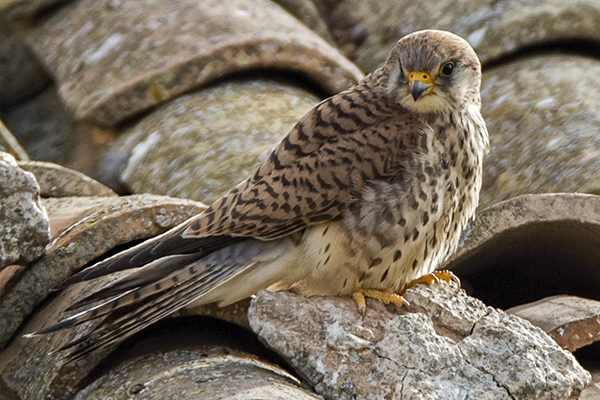 As usual we took the road to Higueruela and at our first stopping point we got a Subalpine Warbler.  Our main pull in off this road is near the poplars where in the past we have seen Golden Orioles, but not today!  We did see however 2 Woodlarks.  It was a real treat to see these birds so well on the ground at such close range.  Also at this location we saw a Black Redstart and a Pied Flycatcher.  A number of Mistle Thrushes and more Black-eared Wheatears were also seen.  A further discovery was another pair of Chough, this time bringing nesting material to a convenient roof space.  At least 2 Hares were seen here, their head markings being quite striking. 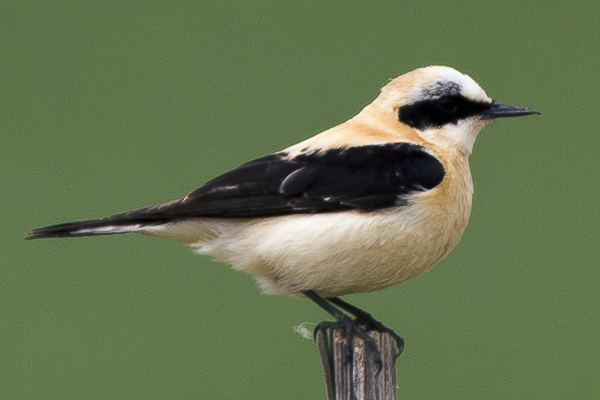 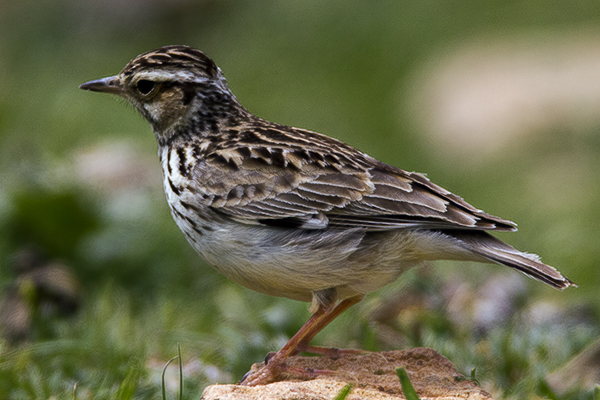 The lagoons at Petrola held the usual species such as Ruff (and Reeves), Wood Sandpipers and Marsh Harriers.  A single Buzzard was also seen.  Great Bustards were seen in the usual place just over the brow of the hill.  One provided a close fly past, but too close and too suddenly for the cameraman.  A good number of these birds could then be seen spread out in the fields to our left.  Some fairly close but others more distant.  The larger males displaying with heads held high.  We counted 43 birds in all.  At Corral Rubio there were considerably more waders.  Along with Wood Sandpipers there were Avocet, Black-winged Stilt, Dunlin and Little Stint.  A couple of Gull-billed Terns were also present here.  Further along our path was blocked for a while by a flock of sheep but this did give an opportunity to pick out some Yellow Wagtails that were in attendance. 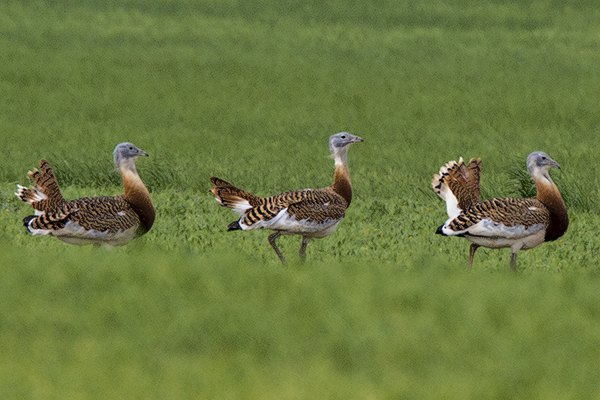 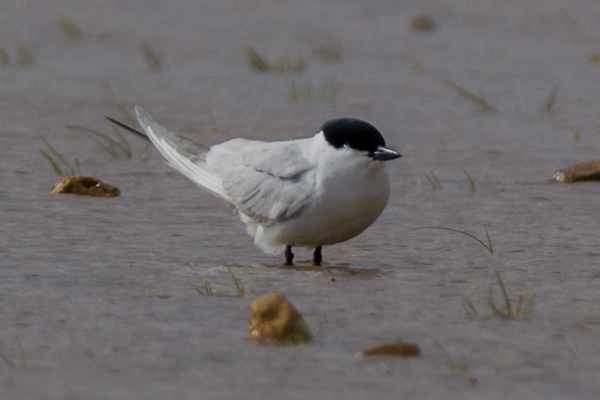 Where the track had been flooded, a couple of weeks back now, there was a single narrow deep puddle.  As it was now 6 o’clock we needed to get back and retracing our route was not going to be an option.  We decided to tackle this by approaching at speed! A big splash but we came through the other side without a problem.  A great day with the usual high quality birds characteristic of this area and a good number of Spring migrants. 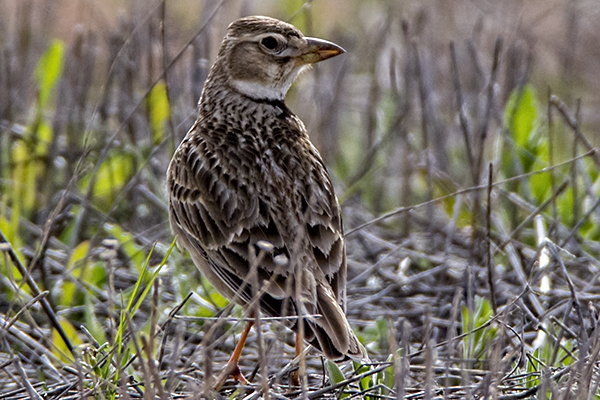 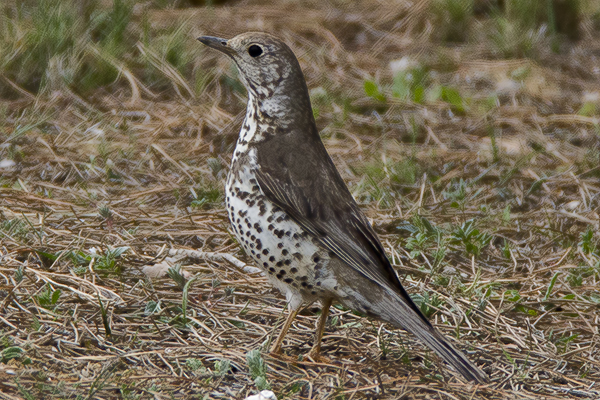 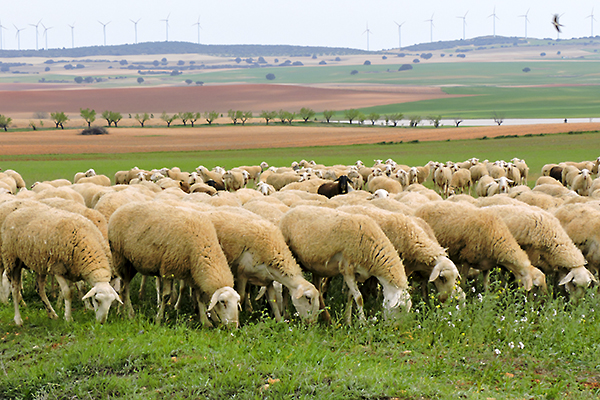 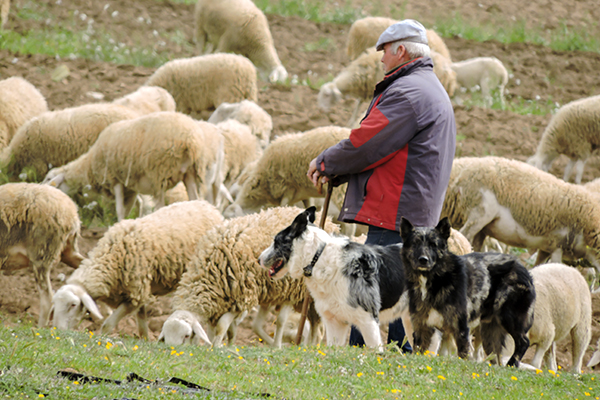