Today we joined the November field trip where we enjoyed catching up with several members we hadn’t seen for a while, as well as meeting a few new people who had come along this month.

During a short stop at the Salinas we saw a group of Spoonbill along with Great White Egret, Little Egret, Grey Heron, Great Crested Grebe, Greater Flamingo, Yellow legged Gull and Slender billed Gull. Moving on to the beach at El Pinet we saw a few Gannets either flying or sitting on the water along with a Sandwich Tern and a few Sanderling running along the beach.

Next we drove around the El Hondo countryside where we saw Cattle Egret, White Wagtail and a surprising Harris Hawk, on top of the palm farm, presumably an escape from a falconry centre. Shortly afterwards we saw another raptor perched on a haystack which, after much discussion and review of photos, was deemed to be a juvenile Booted Eagle. A couple of Green Sandpipers, Stonechats and a Kestrel were added to the list before we arrived at San Felipe. 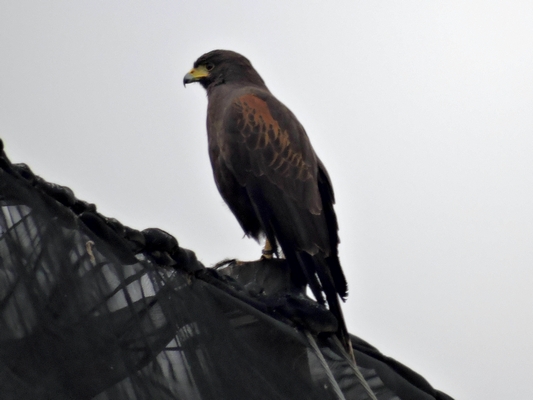 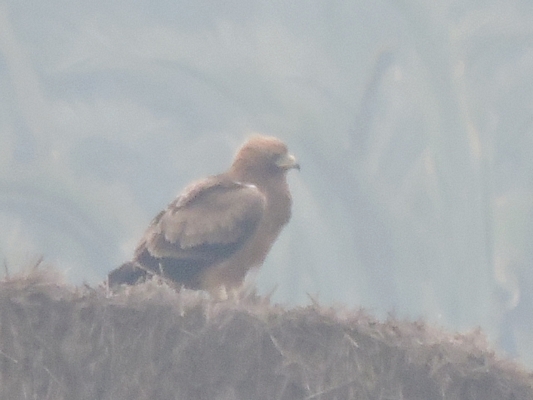 By now we were on our way to our lunch stop via a brief stop at La Embalse de La Pedrera which produced very little apart from Crag Martin, Great Crested Grebe, Coot and Lesser Black Backed Gulls.

After a good lunch we drove to the parking area opposite the Sierra de Escalona to watch for raptors. A few of us walked into the woods where we added Chaffinch and Serin to our list and an Iberian Green Woodpecker was heard calling. We headed back to the car park where the group who had stayed behind told us they had seen Dartford Warbler but little else, and sadly neither group had seen a single raptor. Eventually, the rest of the group headed home while John and I stayed behind in the hope of seeing an Eagle or an Owl. After about half an hour a raptor did land on the usual perch on top of the ridge but without a ‘scope it was impossible for us to identify the bird. At 6.15, as it was getting dark, and with neither sight nor sound of an Eagle Owl we decided to call it a day.